Holly Webb has been in the Yosemite climbing community for over a decade. She has an impressive
list of El Cap ascents. Holly asked me if I’d help her with her “40 by 40 goal.” I said “sure” and then asked just what that was. Holly wanted to climb El Cap 40 times by her 40th birthday. Both Holly and myself currently do not reside in Yosemite and both of us have spouses, work, and kids* to keep us from long protracted adventures up El Cap. I went down the list of routes she may want to do that we could knock out in a day, or that we thought we could do in a day. When it came to The West Face she admitted she had never done the route despite the fact that she had done 27 different routes on El Cap! Done!-West Face it would be.

The Plan: Meet in El Cap Meadow Saturday morning before the sun was up. check in on the gear and supplies and get the hike done by headlamp before the sun could over heat us. Climb as much as possible in the strategic west facing side of El Cap for as long and fast as possible to avoid the sun, perhaps making the summit before “The Orb” gazed on us.

Holly was to bring the complete rack. She’s got more new gear then me. I brought the 70 meter Bluewater. We weren’t planning on stretching pitches or short fixing, but it’s nice to have for emergencies if you want to bail. -And of course could be used to extend some pitches if you wanted. We both brought our favorite energy foods and I threw in a holiday beef log. It was going to be hot so we brought 3 liters of water each. (and some NUUN to flavor it)

Our plan was to free what was fun, french free tougher stuff, or outright aid anything that gave us pause. “Just climbing” the route cause we aren’t hung up on style so much as going up and covering tons of cool ground. -And, it was TONS of cool granite terrain. Despite The West Face being perhaps 2/3rds the length of the tallest El Cap routes it’s still a long route with 16 pitches, many being 50 meters long. If you super imposed it on the east wall it would be taller then the Zodiac. 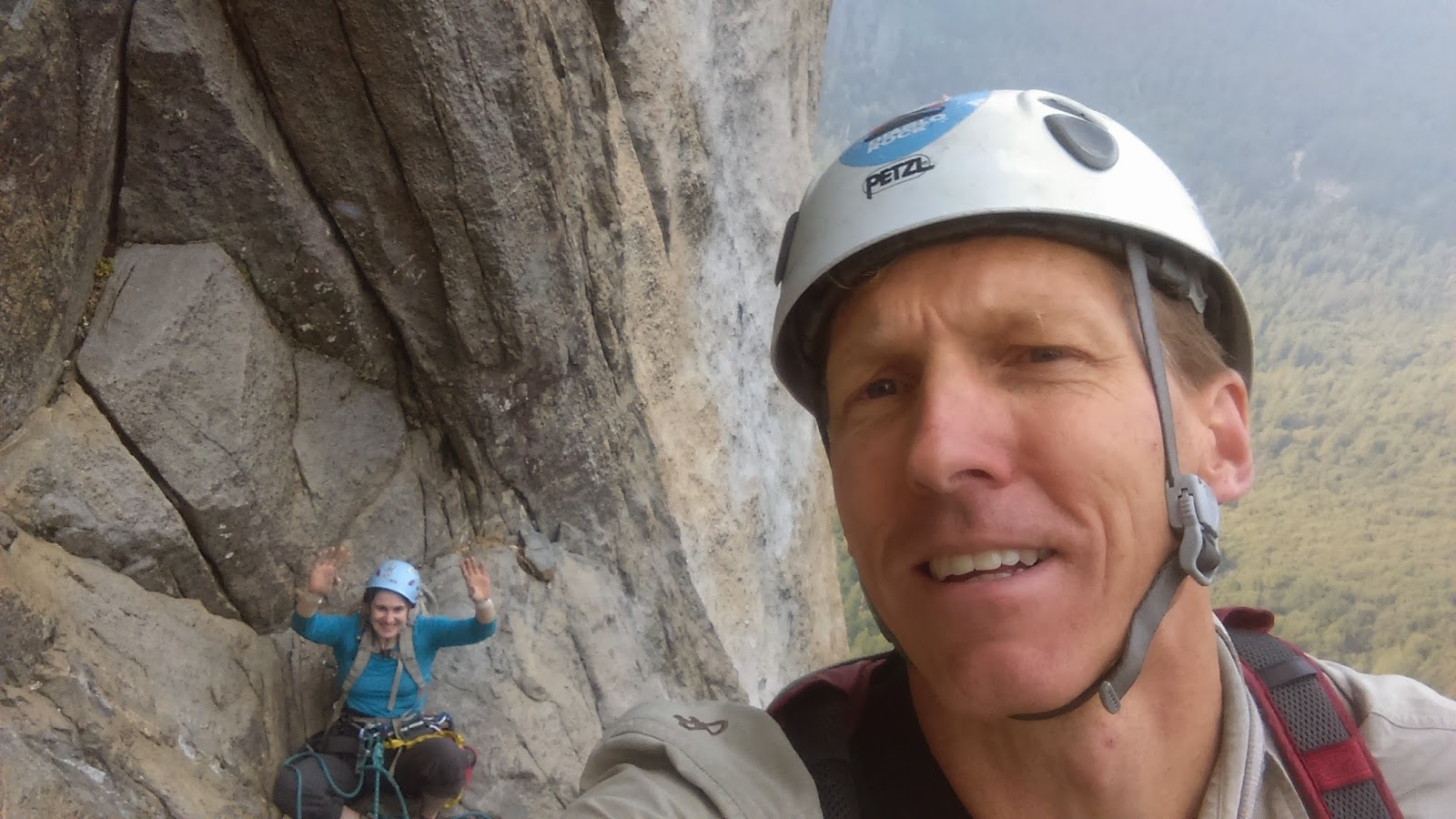 About 50 meters from the base of the route we turned off our headlamps and could hike the remaining gully by dawn light. Around 7am we started the route. The first two crux 5.11 + pitches of the route are right off the ground, so it’s a tough start to your morning after the hike. We didn’t bother freeing much of those pitches. We did both completely free the 5.10a airy 4th pitch. It has an ultra classic roof move that looks way harder then it is.

During the next 7 pitches we mixed and matched some free, aid, and french free to arrive at the top of pitch 11, The Grand Traverse. It was around 11:30 am and we figured we should stop for lunch and enjoy some beef log, trail mix, and other goodies in our bellies for the remaining long 4 pitches, rather then on our backs in the small packs we each were carrying. We mixed and matched again until Thanksgiving ledge then simul-climbed to the top in two long pitches. Topping out in 6 hours and 1 minute from when we started at the base.
Being “The keeper or Librarian of the Speed Records” I looked up to see what the fastest known time was previously. I was stunned that the record for a Female/Male team was 5:59. OOPs we should have taken a little shorter lunch.

ohh, and to the title of this post:  It's nice to have goal seeking friends, be they in your neighborhood or just on your phone list. If you are going to pursue challenges, invariably you are going to need the support of someone who has challenges of their own. When you find like minded folks, put em in your Rolodex for future adventures. 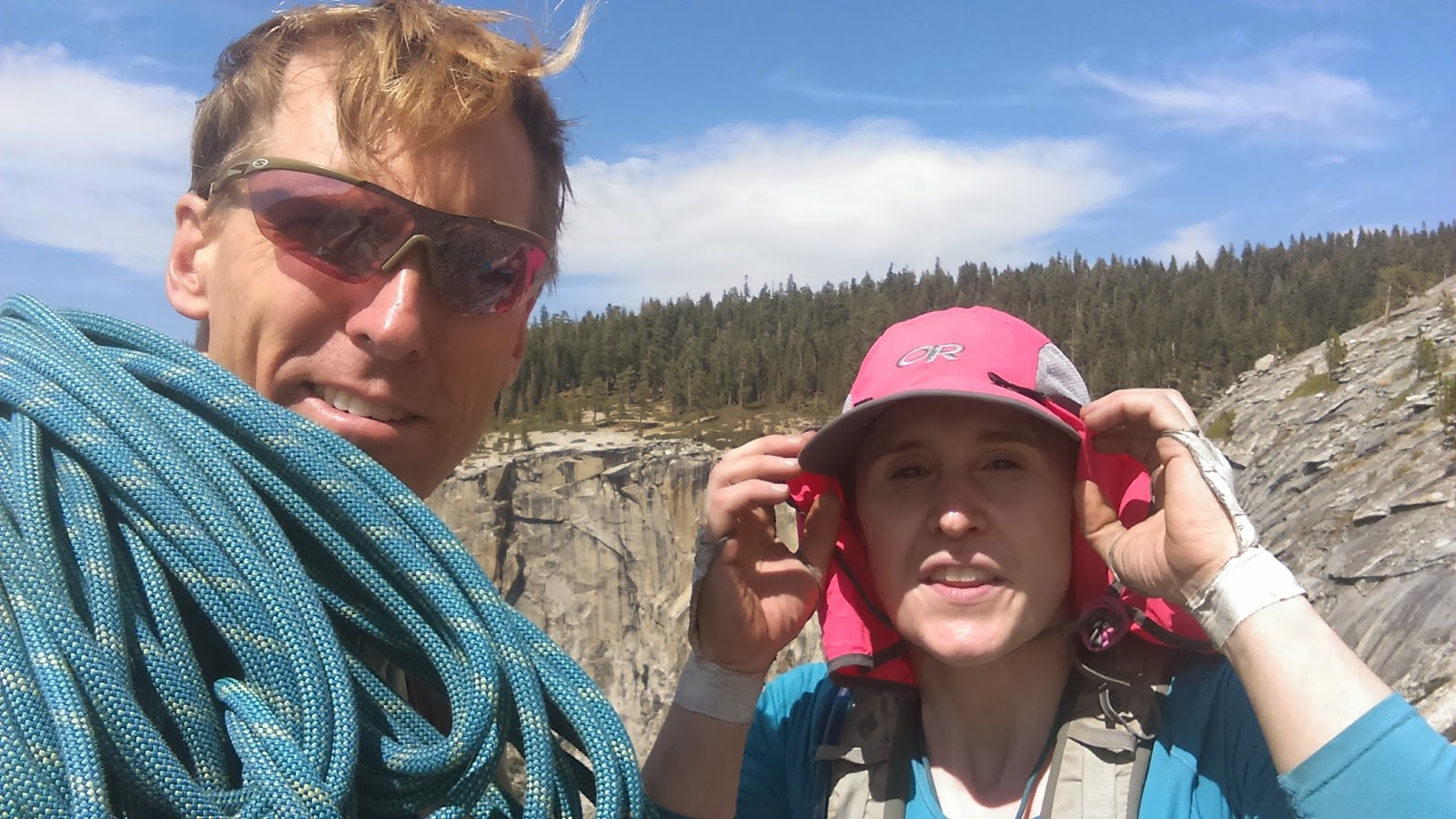