Get out of the Ditch

Yep, it has multiple meanings. I think I first heard Yosemite referred to as "The Ditch" by the blasphemous Gregory Crouch. The second meaning of "The Ditch" is a substitution for "The Grind," "the 40 hour work week," or "The City."

Wednesday (hump day), I finished with a days' work managing Diablo Rock Gym. Headed to the high school to pick up my daughter from track and field practice then dropped her off at her Spanish evening class. I headed home to share a dinner bite with my wife, catch up with my son and throw some clothes in a bag for my Thursday climb. By 6:30pm, I head down to pick up my daughter from class, drop her off at home, give everyone hugs goodbye and start the four-hour drive to Yosemite! Perfect timing too. The commute traffic out of the city had died down and it's clear sailing.

I arrived at my home in Yosemite West just before 11pm and am asleep within minutes.

The alarm goes off at 5:40am but I heard Will Masterman brewing coffee prior to that in prep for our quick morning gear check. Will arranged the rack the day before and I gave it a quick once over. We were aiming to head up the Salathe route for our "Thursday break in the week." Hmm- one #4, one #3, doubles on #2s and #1s, and triples on everything below that, except the smallest tiny cam we had only one of. Two biners of nuts, 10 quick draws, 6 runners and a host biners. Standard personal gear, jugs, speedy stirrups, one etrier, and two small backpacks. Food: a selection of Honey Stinger products, trail mix, hard Monterrey jack cheese, Field Trip Jerky and assorted NUUN tablets. We were out the door by 6:30am and in El Cap meadow by 7am. 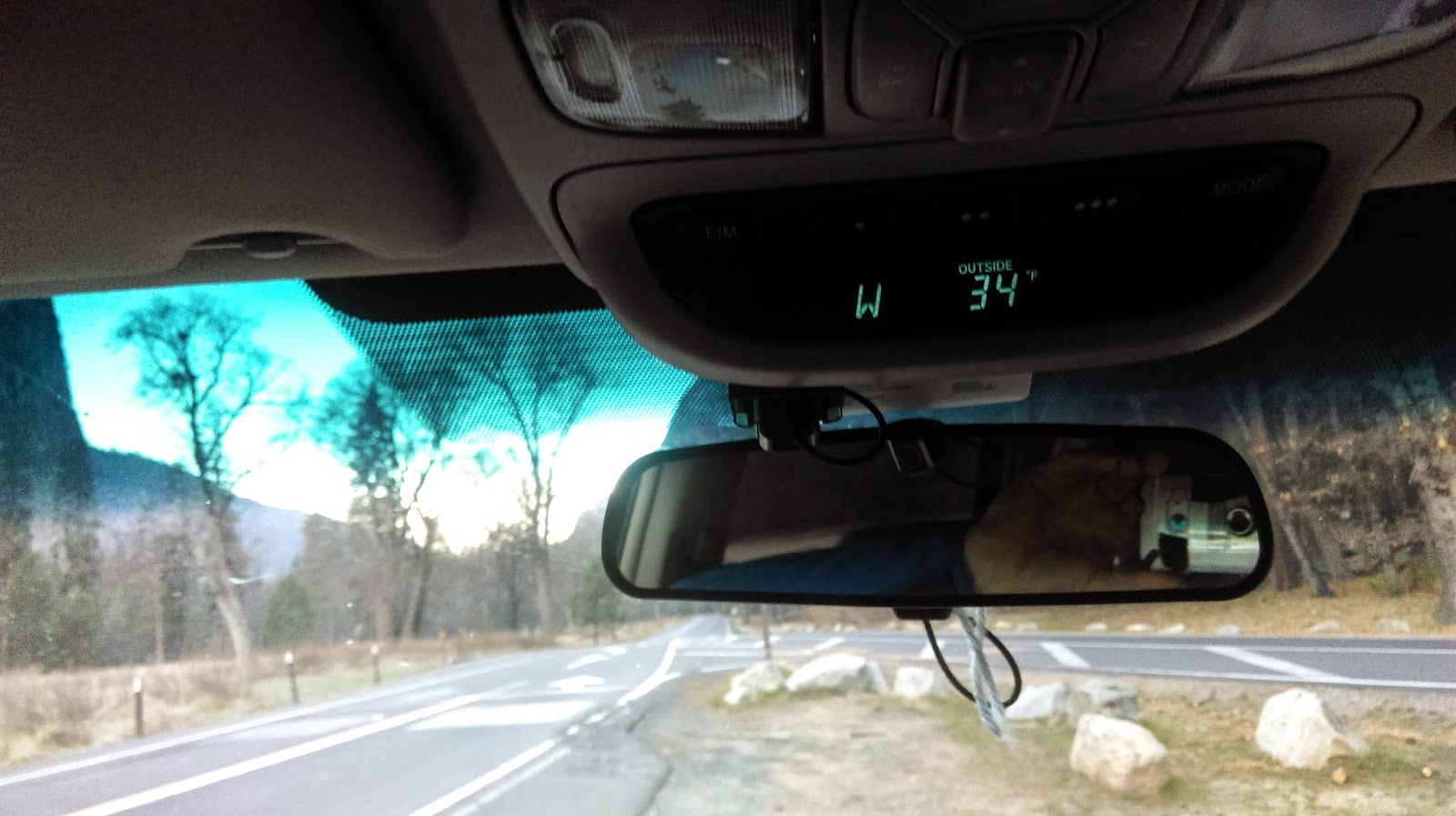 It was light and initially I thought we slept in too late since it had been light when we left the house, but it was an unwelcoming 34 degrees according to the dash board thermometer when we parked. It felt about that temp when we started walking to the base. 99% of the time it's been my experience that a "lake of cold air" sits in Yosemite Valley in the mornings, just the 75 to 100-foot rise in altitude from the meadow to the base of the cliff is often as much as a 15 degree temperature change. I was looking forward to that as I curved in my shoulders and shuddered at the beginning of the hike. 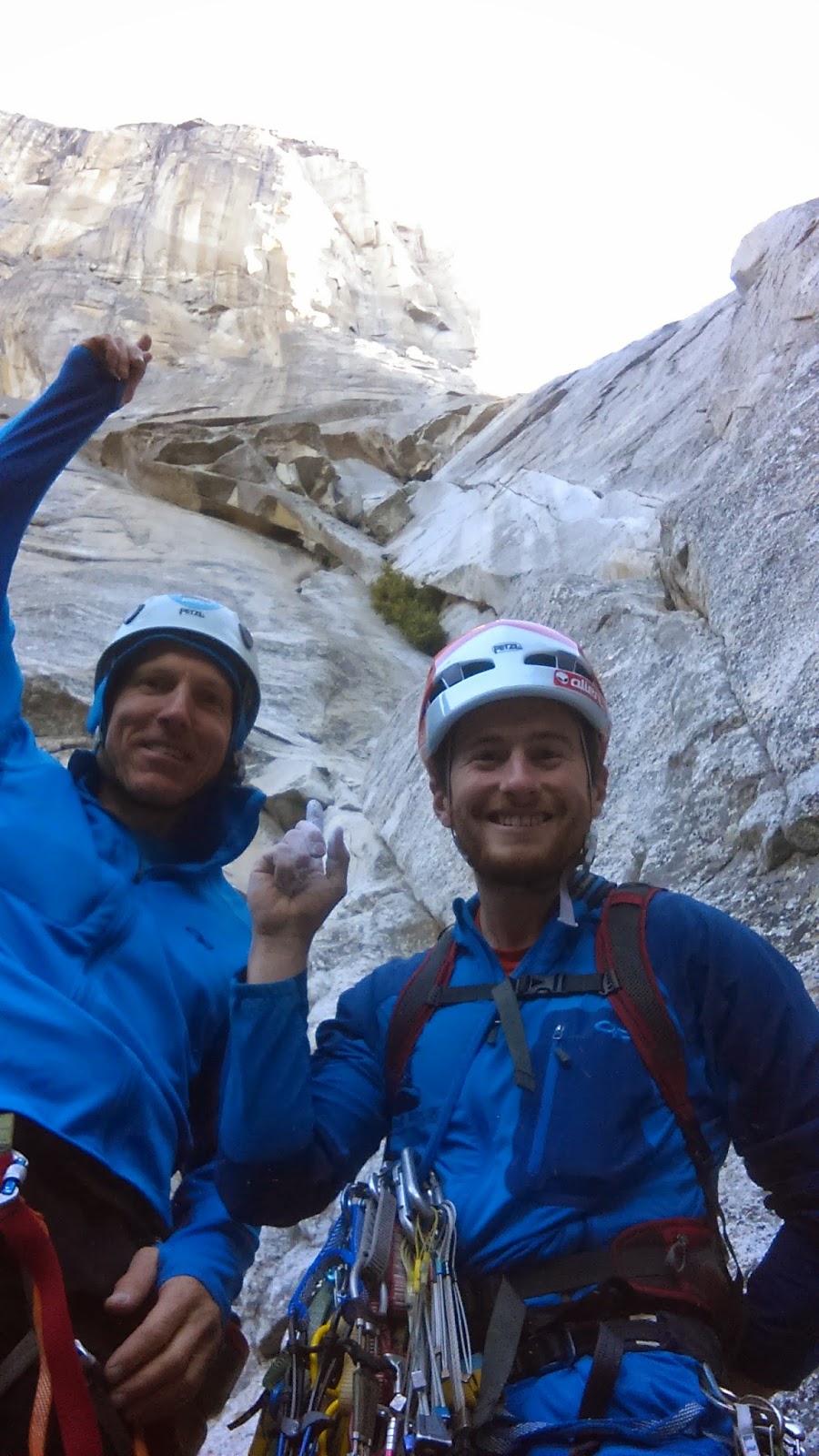 We arrived at the base of the Salathe and Will was leading the first pitch at 7:27am! Indeed it had warmed up since leaving the car, but it was still brisk (probably 50 degrees). I was happy to let Will take the lead. "Warming up" on a 5.10 crack in such temperatures should be left to the under 30 crowd. 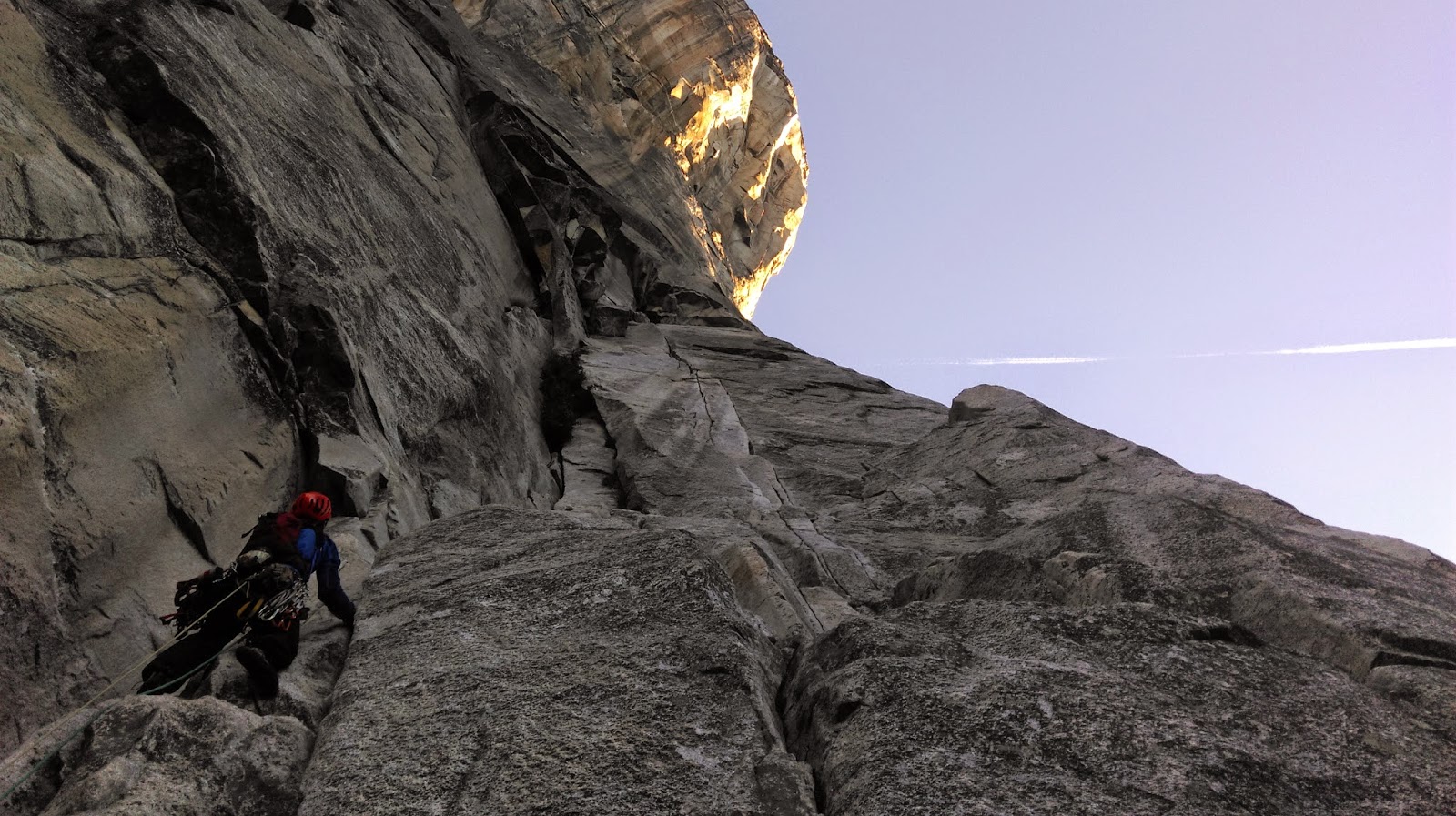 Will dispatched the first four pitches in good time. I jugged all four as the needed warm up for my leads to come. The sun hit us just as Will handed off the lead to me. You'd think I was wise enough to plan that! I took the next ones to get us to Mammoth terraces by a little after 11am.


By the last three pitches before Mammoth we were down to our T-shirts! Is it really February?!

Having some salty treats like Jerky, cheese, and trail mix is a much appreciated treat along with the energy food we consumed along the way. (Honey Stinger, and NUUN). Yep, I've done this a few times.


We rapped down a nasty fix line to Heart Ledges. I told Will that he should keep our 70 meter line attached to him while I rappelled. A little curious look came on his face and I answered... Just in the off chance that this old line breaks you'll have a way to get down. Kinda doomsday thinking but never hurts to play it safe.

The rappel, although sketchy with a knot to pass, was uneventful and we started out our climb out left of the Heart Ledges after another brief snack break.


I "got to" to lead the ear pitch. Lucky me. For those who don't know it, the ear is like climbing along an upside down coffee cone/filter. We refer to it as a bomb bay chimney. It gets narrow enough at the top that you can't get your head in with a helmet on, AND reach high enough to just have your #4 cam get a bite on the rock. At 6'1" I am fortunate with my long reach I was able to keep myself protected for all but two moves as I chimney-ed my way out to the lip. Jugging the ear is no less awkward and Will had his fun navigating the follow.

We arrived at the Alcove below El Cap Spire, part way up pitch 20 and took inventory of our situation. It was a little after 4pm, a little windy and when not moving, I had all my clothing on. We figured only a few hours of light left and by my prediction of our rate of ascent we'd be topping out around 2am, that is, if we could keep moving. In great spirits as we were climbing on granite in Yosemite, in February! Nonetheless we were content to head back down to the Valley floor. And so we did.


As a little tip on light and fast and bringing just enough to be able to safely retreat, but not too much, we nailed it perfect by bringing a 70-meter lead line and approximately a 30-meter X 7mm tag line. This allowed us the option to do a 50-meter rappel, kind of. I've thrown this combination out to a number of people who asked me what is the minimum amount of rope you need to bring (see further notes at the bottom). I believe I've used the system for one rappel before but this retreat was going to be tricky with a sideways lowering to Heart Ledges. (I believe there is a  rap route straight down from the Hollow Flake, but I didn't know if the spacing was 50 meters or longer. I also wasn't sure that we had a 30-meter tag line, in fact it may have been 25 or less) I knew there were short pitches between us and the Hollow Flake Ledge where we'd need to lower and go sideways, but I didn't know if we'd get lucky and it would be the magical 35 meters between anchors, or less! Hey, time for a science experiment to learn something! Will (Guinea Pig) tied into the rope and I lowered him off. If he reached the next rappel anchor before I saw the bi colored halfway mark on our handy 70-meter Bluewater rope, then we were good to just have Will clip to the anchor and I could immediately rappel with the gri gri I was using to lower Will. This was the case on five of the seven rappels to the Hollow Flake Ledge. When the halfway mark was passed I knew I had to employ the 7mm on the short end of our lead line. Once Will arrived at the anchor that was farther than 35 meters, I tied an overhand knot on my side of the rope and clipped it to his side. Then I tied the 7mm to the short end of the 70 meter lead line (my side). I rappelled on the side Will was on, the knot locked into the rappel anchor and would not be pulled through. I kept a hold of the 7mm line and once arriving to Will we just pulled the 7mm rope and down came the knot and our biner! Ta da! The lower sideways over to Heart Ledges involved some sneaky stuff, but suffice it to say we made it and rappelled the fixed lines to the ground and we were back at the car before 8:30pm.

We didn't "summit" but it's all in the journey and even if we'd made "the top" we'd have only climbed out of a ditch. As it was, we had a fantastic day of climbing. As I type this I am really sore all over,  with a big smile on my face knowing I will recover from the soreness feeling stronger.

I did a little business around the Yosemite neighborhood Friday morning and headed back to the city in time for dinner with my wife, video game with son before dropping him off at friends and then catching a high school basketball game.  Hope your Thursday was fun as well. You weren't stuck in the ditch I hope.

Notes on rope choices. Certainly if you know the descent specifics you can be more exacting on what rope combinations to take. Bringing a 60-meter full-size rope and a 5 or 7 mm X 60-meter tag line is an option. I like the 70 meter lead line because it gives you better options for short fixing when leading. I'm known for being flexible so I'll defer to a partner if they are adamant about another combination.
Posted by Hans Florine at 11:27 AM 2 comments: