This years OR Summer show was fast paced for me.

I went in the show and my first stop was the CRKT booth.
They had only one extra sample of the NIAD knife
that I would be launching the following day. I had one person in mind that might be in the convention center who would be the most deserving of receiving that sample. Someone who did the very first NIAD. I sent out a text to John Long, and he replied with an affirmative and gave me his location.

En route to meet John I hydrated up at the NUUN booth and caught John among the various climbing vendors. He was delighted to receive the knife. John, with NIAD in hand, could not resist messing around with some wonky posses. 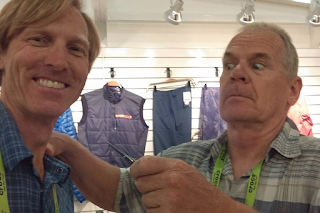 Next up I went down to Outdoor Research  to check in on pack and glove designs with Megan. 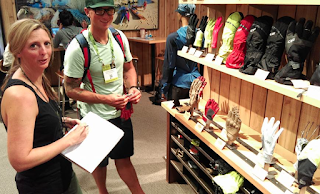 Coolest thing coming out is light subtle belay gloves! -Zero breaking in time. I love em. After a getting a few updates on pack designs and some feedback from Megan on gloves, I moved on to the Access Fund Booth to chat with Tim about AF matters.

In the early afternoon I met with Everett from LaSportiva  and he walked me through the line of new shoes coming out. I’m probably a bit unexciting on this front in that I just love their existing shoes in the line. TC Pros for Yosemite climbing, Xplorers and Gandas for approaches, and Katana velcros for the gym.

I touched base with Daniel over at Tenkara USA  out in the Pavilion. They make the coolest, simplest, and most effective fishing rods you’ve ever handled. (or I’ve handled)

After the show I headed down to REI  in Mill Creek to give a show about my travels with Erik Weihenmayer and adventures in Yosemite. Wonderful little crowd that had great questions. - So cool that an REI is right next to a Momentum Climbing Gym.

After the show it was off to Steve Edward’s home for some CRKT TomaHawk throwing!

Thursday morning started off with a core and exercise class at 7:30 at Momentum in MillCreek.  Then a swing by Massif Gym to chat with an old climbing partner Nick Fowler. 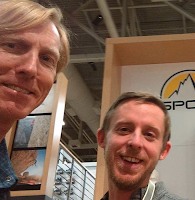 1pm took me to the Blue Water Ropeshttps://bluewaterropes.com/  booth to sign “Speed Climb” books which Falcon had generously donated. A fun list of folks came by including but not limited to: Lynn Hill, Libby Sauter, Chantel Astorga, Konstantin who gave me this wonderful handmade knife, Mike Gauthier from Yosemite Park, John Spalding from Falcon books, Tommy Caldwell, and a host of others.

CRKT’s launch of my new knifes was to take place at 2pm at their booth. The number of people coming by was fantastic.  Sean from GearJunkie came by the booth and let me walk him through the design features of the knives. Sean said we were in the running for the “Best in Show Award!” That was cool just to be considered. 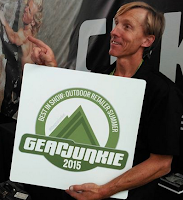 I was busy for two hours at the CRKT booth showing the knives to people coming and going. Just as I was packing up to leave Sean came back by and had a huge Best in Show Poster Board Certificate to award us for the NIAD knife! Wow what a great honor.

Thursday evening was a night out to dinner, drinking, and deserts with the CRKT team to celebrate the launch of the knives and the winning of the award. Still feeling really great that we were recognized and at the same time know that the design had many influences from others. –Notably Trango’s Piranha.

Friday morning was an 8:30 am class at Momentum in MillCreek again. I bopped around from Honey Stinger, to Petzl, to Slingfin, to the AAC, to CRKT, OBOZ, Leki, Nuun, DFX, a noon break with Yoga Slackers. I found out about the crazy samples available in the pavilion out in the lot. – Every manner of: chew, bar, cookie, gel, drink, trail mix, jerky, and shot was available for sampling! Glad I skipped lunch! A must visit area at every show.

I had to leave the show early for a 6pm show down at the Momentum gym in Sandy. I was sharing “Hans’s version of The Race For The Nose.”  The following folks gave stuff to give out at the event, which raised funds for The Access Fund: DFXsports, Nite Ize, Honey Stinger, NUUN, CRKT, Outdoor Retailer, and Falcon Books. After the show a few climbers hung out and went over the beta on The Nose in anal detail with me. Totally geeking out about how to prepare, plan, and execute it. – Loved It!  I stuck around and attempted the wicked hard cracks they have at the gym and did a little bouldering. To cap the night off I threw a token few Tomahawks back at the Edwards establishment.

Looking forward to the next OR show. 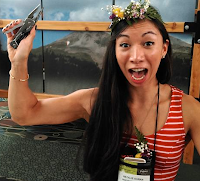 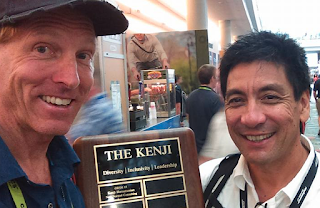