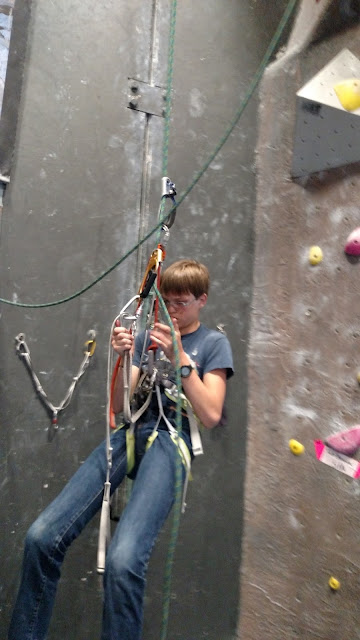 My 14 year old son Pierce had been doing the after school Touchstone Climbing Team Training sessions twice a week this past winter. I didn't push him to do it. I crossed my fingers and hoped he'd enjoy it or even "stick with it." He has continued going now for over 6 months! - I couldn't be more pleased except....  this early spring I floated the long shot suggestion by him that he should climb The Nose with me this season with another dad and son in the climbing world. He said yes with virtually no hesitation! Just that he was willing to try it was a giant win for me. (I was more pleased)

The Executive Director of The American Alpine Club, Phil Powers, and his son Gus were the other two that I'd set up to climb with us. I figured if another Dad/Son Team was counting on us, Pierce couldn't so easily back out. As the dates got finalized between Phil and I, suddenly it was less than a few weeks away, I thought I'd broach the subject of Pierce training for doing The Nose, rather than just showing up and hoping I could drag him up. Pierce actually said he'd like to spend some time in the gym working out how to jug effectively. - I was flabbergasted, - in a positive happy way. After two sessions in the gym the date was upon us, we met Phil and Gus in the meadow at 6pm on Thursday July 6th.  Although normally it is too hot to climb in July we were granted a reprieve and it was only in the 80s.

That evening we took a load of water and ropes to the base and got to organizing the gear for a single push ascent. On the approach we were delighted to see a colorful king snake guarding the scramble ledges up to the base.
After all was looked over and packed we set out for the base and spent the night there with ropes rigged to the base of the first pitch. We were almost asleep under a near full moon at dusk when two loud noises grabbed our attention, two base jumpers were taking advantage of the light at the end of the day and when their chutes open it made a startling noise.

Waking up at 4:30am we quickly tightened down the two haul bags and three packs and set off up the route. I led the first few pitches with two 70 meter dynamic lines and a 100 meter static line,- taking it up at the half way mark. This longer rope allowed me to essentially drag up four lines, thus when I arrived at the anchor, all three could jug while I started hauling. This system worked while the pitches were less than 50 meters long, but as we moved along through complicated pendulums and pitches being longer than 50 meters we changed tactics on the fly and had the boys jug first and Phil or I would follow up on the line they had finished on first. Suffice to say, we used a variety of rope tricks to keep everyone moving as best we could. On this first day we loaded the three back packs with as much water weight as the followers could bear to enable the bags to be light enough for hauling with only a single pulley.

In the hottest part of the day Phil took over the lead getting us out of Dolt Hole Cracks and moving us into the Stove Legs.  I finished off the Stove Legs and we all arrived comfortably on Dolt Tower around 5pm.

We opted to push on to El Capitan tower and were able to set up camp before night fall. Given the full moon we didn't really need to rush as the dusk light was as bright as 2 hours after sunset with the shining moon reflecting off the light grey granite. We all gorged on canned soup, bagels, and other savory snacks. I fixed the ropes up to the top of The Boot Flake so we could get a jump on the climb the following morning. 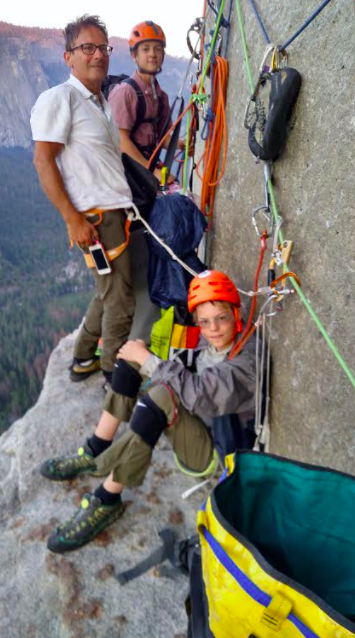 While I was leading up to fix the ropes we saw another base jumper zooming down by the Dawn Wall
just hundreds of feet to our right.  The startling noise from the chute opening sounded off, we could not make out the jumper's chute in the lower valley and hoped it was just the dimming moon light playing tricks on us. Bummer, we heard sirens minutes later and a group of SAR folks scouring the talus field with headlamps in search of the body!  (We later learned this was a hiker/climber who did not have a chute. Unknown as of the writing of this blog if it was an accident, suicide, or other cause.) Despite the rather ominous feeling in the air from a jumpers ground fall all of us slept like... Rocks. Everyone was completely exhausted from the 14 hour day.

Another 5am start rustling out of our vertical campground and we were all up on top of Boot Flake by 7:30am. We made it around the corner into the Gray Bands thus "buying" ourselves a few more hours of shade climbing before the sun beat down on us the second day on the wall.

Whilst climbing a plume of smoke came out of the forest at the west end of El Cap Meadow. Hours later there was a full assault via helicopter and fire engine ground crews to get the fire out. Quite a complete fill of "sights" for the boys first run up El Capitan.  We lost a helmet a few hours into the day so we had nothing less than a standard wall ascent. - You've simply got to drop something at least once to ring home the concept that you are REALLY OUT THERE on a big wall.

Our tentative plan was to bivy the second night at Camp VI, but the team was making great time and
we opted to cut weight by leaving a gallon of water at Camp VI and sprinting for the summit to top out before the evening required headlamps. With some tricky pitch linking and darn good spirits all around we made it to the summit in the final minutes of the dusk light. - a new double father/son speed record! (Probably the only double father/son ascent.)

Sunday morning we loaded the boys up with packs and started the 4 hour descent. -It was darn warm on the descent and we stopped regularly for water breaks, and even got one small creek stop for a refresher. We made the obligatory stop at the top of ZM to get the back sight of the profile shot. Once we navigated all the down scrambling on open granite slabs, negotiated the four and half long rappels, and made it through more lose scrambling and scree, the boys hit the forest trail and were waiting for Phil and I at the parking lot tables. 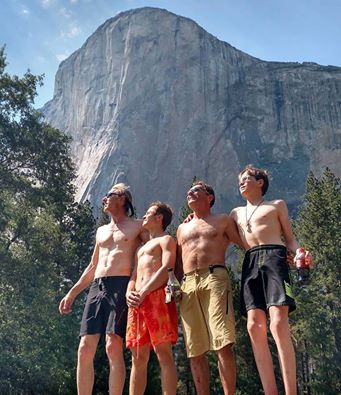 Super proud of Gus and Pierce. They put in a ton of effort and "enough attention" to safety to pull this off. They never really whined or asked the classic: "How much longer til...?"  Can't think of a more rewarding thing I would of wanted to do with my son this summer, and it's only early July.

On the mile hike from Manure Pile Buttress to El Capitan we found a number of thimble berry* patches with perfectly ripe berries. In 34 years of Yosemite adventures I can't recall ever seeing them so plentiful. We all got our fill on berries. Upon return to the meadow we all took a jump into the ice cold Merced river, then headed down to the Awahnee** all-you-can-eat brunch for a refueling. Perhaps not classic, but well deserved by our boys.

Feeling darn appreciative of all I've got.


ps. One of the challenges at "my gym," Diablo Rock Gym, is to go 24 hours without internet or phone. I opted to do my 24 hours when climbing with my son. I brought my phone for emergency and pics. It turns out the battery basically died mid way so I more than met that challenge. Interesting how those gadgets can "steal away the present" if we are not conscious of their power.  Be present with the special people in your life.

*They are a lot like raspberries, and at first sight appear to be unripe black berries. I suppose these could have been Ribes berries, but with their great flavor I think they were thimble berries.